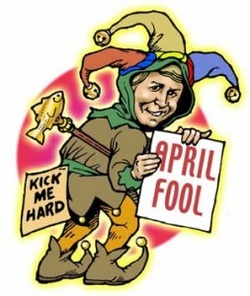 April Fools' Day is celebrated in different countries on April 1 every year. Sometimes referred to as All Fools' Day, April 1 is not a national holiday, but is widely recognized and celebrated as a day when many people play all kinds of jokes and foolishness.

Traditionally, in some countries such as Canada, New Zealand, the UK, Australia, Cyprus, and South Africa, the jokes only last noon, and someone who plays a trick afternoon is called an "April Fool" and taunted "April Fool's Day's past and gone, You're the fool for making one". Elsewhere, such as in France, Italy, South Korea, Japan, Russia, The Netherlands, Germany, Brazil, Ireland, and the U.S., the jokes last all day. In France and Italy children (and adults, when appropriate) traditionally tack paper fish on each other's back as a trick and shout "april fish!" in their local language ("poisson d'avril!" and "pesce d'aprile!" in French and Italian respectively).

In Spain and Ibero-America, an equivalent date is December 28, Christian day of celebration of the Massacre of the Innocents. The Christian celebration is a holiday in its own right, a religious one, but the tradition of pranks is not, though the latter is observed yearly. After somebody plays a joke or a prank on somebody else, the joker usually cries out, in some regions of Ibero-America: "Inocente palomita que te dejaste engañar" ("You innocent little dove that let yourself be fooled"). In Spain, it is common to say just "Inocente!" ("Innocent!"). Nevertheless, in the Spanish island of Menorca, "Dia d'enganyar" ("Fooling day") is celebrated on April 1 because Menorca was a British possession during part of the 18th century.