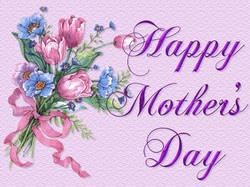 Mother's Day is a celebration honouring mothers and celebrating motherhood, maternal bonds and the influence of mothers in society. It is celebrated on various days in many parts of the world, yet most commonly in March, April, or May. It complements Father's Day, the celebration honoring fathers.

In the United Kingdom and Ireland, there is a celebration called Mothering Sunday, which falls on the fourth Sunday of Lent (18 March in 2012). Most historians believe that it originated from the 16th century Christian practice of visiting one's mother church annually on Laetere Sunday, which meant that most mothers would be reunited with their children on this day when young apprentices and young women in service were released by their masters that weekend.Mothering Sunday can fall at the earliest on 1 March (in years when Easter Day falls on 22 March) and at the latest on 4 April (when Easter Day falls on 25 April). For many people in the United Kingdom, Mothers Day is the time of year to celebrate and buy gifts of chocolate or flowers for their mothers as a way to thank them for what they do throughout the year.

The United States celebrates Mother's Day on the second Sunday in May. In the United States, Mother's Day remains one of the biggest days for sales of flowers, greeting cards, and the like; it is also the biggest holiday for long-distance telephone calls. Moreover, churchgoing is also popular, yielding the highest church attendance after Christmas Eve and Easter. Many worshipers celebrate the day with carnations, colored if the mother is living and white if she is deceased.